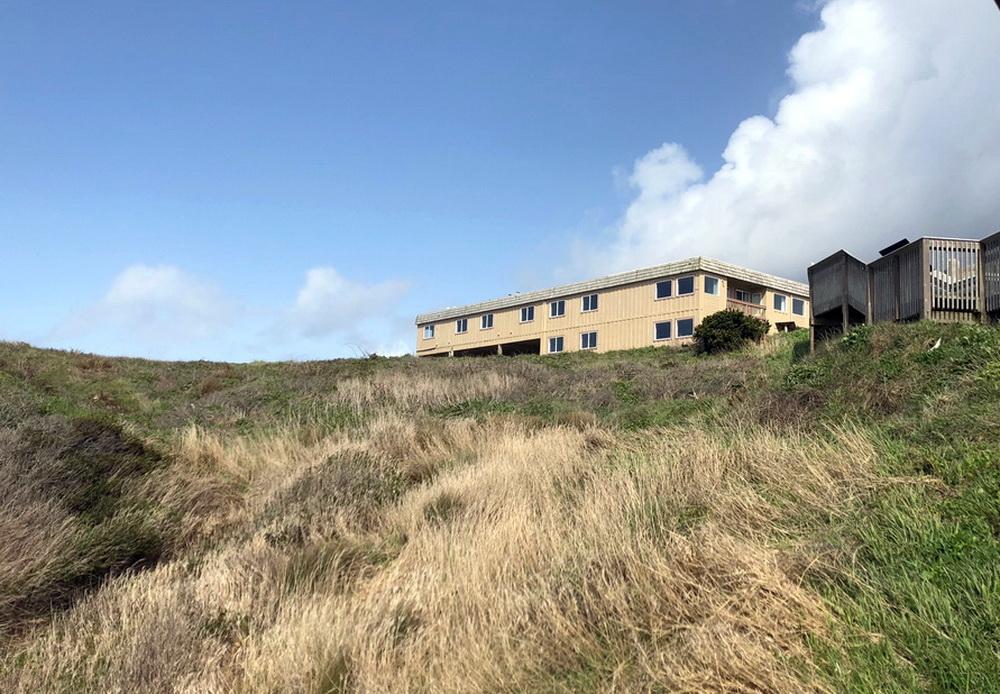 Just about three decades ago, Oregon Shores was actively engaged in a land use battle over plans for Coquille Point in Bandon, supporting a host of dedicated local residents.  Many in city government were pushing for development, but citizen advocacy prevailed.  Almost all of the potentially affected land became Kronenberg County Park or part of an onshore unit of the Oregon Islands National Wildlife Refuge.  A beautiful view and shoreline access point were preserved for the public, and the intertidal area and offshore rocks of the wildlife refuge were buffered by undeveloped land on the bluff top.

However, one parcel was grandfathered in—the site of the modest, and now closed, Bandon Beach Motel.  The commercial establishment clashed with its surroundings, but was relatively small and had only marginal impact.

Now Coquille Point’s future is in doubt again.  A new proposal for a larger hotel on the same site is under consideration.  Bandon's planning commission held two hearings on the proposal, but despite strong opposition from Oregon Shores and a host of local residents, the commission approved a conditional use permit for the structure.  Oregon Shores has filed extensive comments stating reasons why the project should be rejected.

The decision has been appealed to the Bandon City Council.  A hearing on the appeal is scheduled for Tuesday, April 9, 5 p.m., at the Bandon City Hall (555 Hwy 101).  The council will consider the testimony already on the record, and statements from the would-be developer and the appellants.  New public testimony will not be heard.

An earlier hotel plan proposed for the site has already been defeated.  Mike Keizer, owner and developer of the Bandon Dunes golf complex, purchased the property, and announced plans to replace the two-story motel with a much larger, four-story structure.  A building of this size would have loomed over the wildlife refuge and intruded heavily on the view.  The architect’s concept showed large expanses of glass, posing a grave danger of bird strikes in this spot adjacent to a wildlife refuge right on the migratory pathway.  (And we do mean adjacent; the would-be developer wanted to reduce the setback from the refuge boundary to five feet.)  Lights and noise would have certainly leaked into the wildlife refuge, possibly disturbing nocturnal wildlife behavior there.  It is likely that many visitors to the hotel and its associated restaurant would take up parking in the small public lot.  Potential problems abounded with such a scheme.

The Bandon Planning Commission deliberated on the controversial proposed hotel in 2018 and rejected its application, to the delight of Oregon Shores and other opponents. Even more happily, for the time being at least, the would-be developer then announced that the proposal was being withdrawn. This was not a decision on the hotel itself.  Before such a development could be considered for that site, the city would have to change its current comprehensive plan and zoning ordinance to allow a structure of that size with such limited setbacks.  The issue being addressed by the city was a proposed “text amendment” to the city’s plan, that would change the wording in a way that would make the hotel concept eligible for consideration.  The city would be changing its comprehensive plan to benefit one owner on one property parcel.  Oregon Shores submitted comments which opposed on principle the altering of the adopted plan for such a narrow special interest.  Oregon Shores was prepared to oppose this step before the city council, and to appeal it further if need be.  The abrupt and favorable end to the process came as a surprise.

Now Keizer is back with a new proposal (although the point person on the development is his son, Chris).  The re-conceived hotel is downsized to three stories, and now fits within Bandon's zoning ordinance as a conditional use, not requiring a plan amendment.  State-of-the-art window treatments to minimize light pollution and bird strikes are promised.  This proposal is considerably harder for Oregon Shores and local opponents to fight, but we still consider the site adjacent to the wildlife refuge to be inappropriate for a major structure drawing large numbers of people.  (The other side of the coin is that opposition has already been successful; if built, the hotel will have significantly less impact than it would have in the original form, and we successfully defended the principle that comprehensve plans should not be altered to suit one landowner's commercial designs.)

Contact the Bandon planning department at planning@cityofbandon.org or 541-347-2437 for further information on the city’s process.