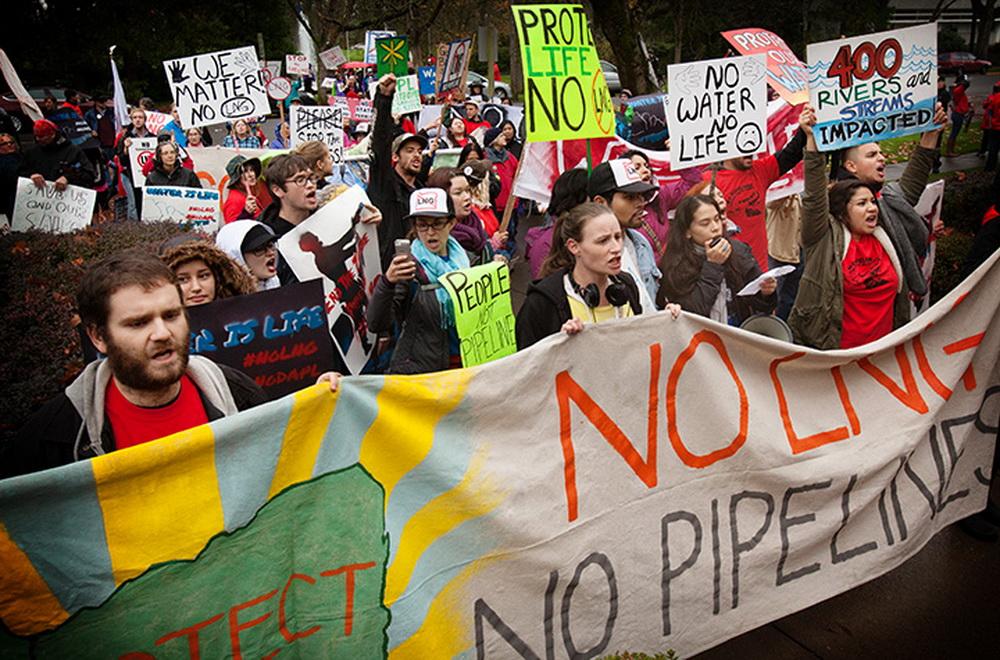 The battle over the proposal to build an LNG (liquefied natural gas) export terminal on Coos Bay's North Spit has entered another round.  And the opposition is out in full force.  More than 400 conservation groups (including Oregon Shores), tribes, and individals have filed with the Federal Energy Regulatory Commission (FERC) as "intervenors" in the case, giving them official status as participants in the application process.  It is believed to be the largest number of intervenors in FERC's history, and virtually all were intervening in opposition.

On Sept. 21, Veresen, the Canadian company behind the Pacific Connector gas pipeline and Jordan Cove LNG export terminal filed their application with the federal government, marking their third attempt to build a 235-mile pipeline through southern Oregon to ship fracked gas overseas. Oregon Shores works actively to block what would be a dangerous and ecologically damaging development, as part of a broad-based coalition, but individuals can also help stand up to Jordan Cove by filing as an intervenor on the project.

Oregon Shores has joined other conservation groups in submitting a comment to FERC protesting the application, arguing that Versesen has made no case whatever for reconsideration of the project, and demanding that FERC reject the application at the outset.

For more than 12 years, Veresen has been pushing for a fracked gas pipeline and export terminal in southern Oregon.  This 235 mile pipeline and fracked gas export project would trample the rights of landowners through the use of eminent domain, disturb tribal territories and burial grounds, threaten 400 waterways and create one of the largest sources of climate pollution in the state.  The local impacts to the Coos Bay estuary, the North Spit, and the area’s fishing and oyster industries, would be severe.

In 2016, under the Obama administration, the Federal Energy Regulatory Commission (FERC) denied Veresen’s proposal for the pipeline and LNG export terminal and declared that the project’s impacts to communities outweighed any claim of public benefit. (The decision didn’t come down either way on environmental impacts, since But Veresen is hoping for different results under the Trump administration, which has installed a couple of new, pro-fossil fuels FERC commissioners. The company is counting on the new administration to push federal agencies like FERC and Oregon state agencies to allow this pipeline project to go through.

For more Information about the project check out our website at WWW.NOLNGEXPORTS.ORG or on Facebook at No LNG Exports.