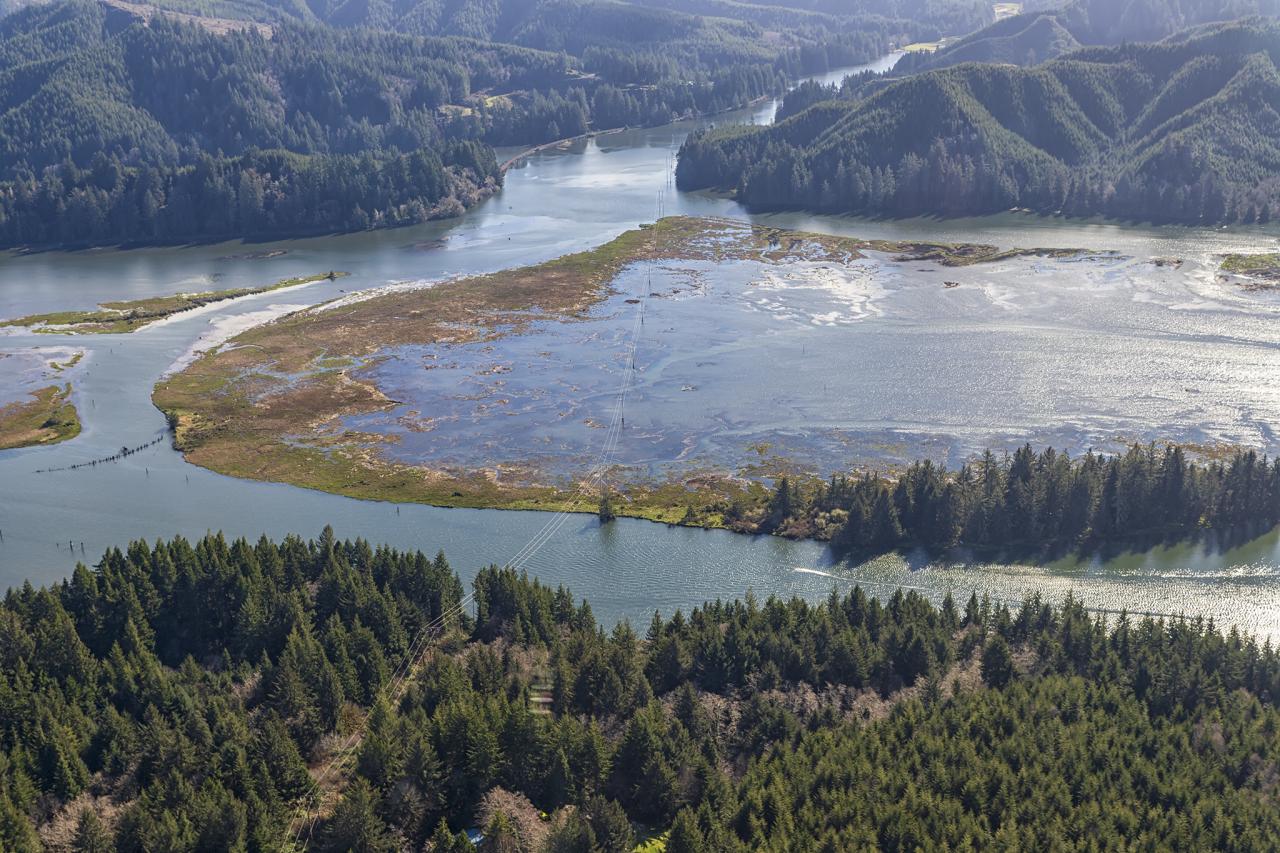 Siuslaw watershed during the most recent king tide.\Photo by Rena Olson, with aerial support from Lighthawk.

The King Tides Project has now completed its 11th year.  This citizen science effort, organized by CoastWatch and the Oregon Coastal Management Program, drew the submission of more than 400 photos, documenting the highest reach of the year's highest tides.

You don't need to wait until next winter to participate, however. The project is placing new emphasis on comparison shots--photos taken from the same spot at the high point of a comparatively normal high tide, to be contrasted with the same view at the high point of a king tide.  Volunteer photographers are encouraged to start now in finding good locations (or ones they've used before) and taking photos during typical tide sequences, anticipating the comparisons to be made with this year's coming peak tides.  (Note that the comparison is high tide to high tide, not low tide to high tide.  If you do take such comparison shots, hang onto them until November--or whenever you take photos during the king tide sequences--and submit them together.)

Some of this year's photos can be seen on the project's special Flickr site, and we will soon be adding more and providing more information about them.  Last year, volunteer photographers Rena Olson and Alex Derr were provided with a Lighthawk flight to photograph the effects of the king tide on the Siuslaw and Alsea drainages from the air, and we are sharing those photos as well.

For the past decade, CoastWatch has collaborated with the state's Coastal Management Program (a branch of the Department of Land Conservation and Development) to sponsor Oregon’s contribution to this international citizen science initiative.  (The project originated in Australia, where these highest tides of the year are known as “king tides,” so the term is now used for the project around the world.) Through the King Tides Project, photographers trace the reach of the year’s highest tides, showing the intersection of the ocean with both human-built infrastructure (roads, seawalls, trails, bridges) and natural features such as cliffs and wetlands.  Anyone capable of wielding a camera can participate.

To see the work of the dozens of volunteer photographers who contributed to the work during the past winter's project, and from previous years as well, see this special Flickr site.

For more information on the project and how to participate and post photos see the project’s website, http://www.oregonkingtides.net/.  Participants can post photographs online through this site. Be prepared to include the date, description and direction of the photo. An interactive map is available that will assist photographers in determining the exact latitude and longitude at which a photo was taken.   Photos can also be posted to social media (Instagram, Facebook, or Twitter) and tagged #orkingtides.

For information about the project and how to get involved, contact Jesse Jones, CoastWatch's volunteer coordinator, at (503) 989-7244, jesse@oregonshores.org.