"Citizen's Guide: Adapting to Climate Change on the Oregon Coast" is Available for Download 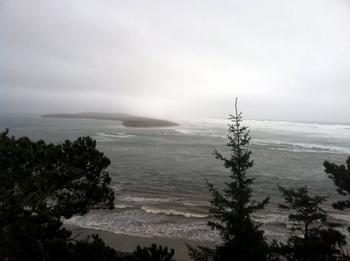 In 2015 our Climate Program released a new and significantly improved version of our Citizen’s Guide: Adapting to Climate Change on the Oregon Coast. The publication, available for download here, is aimed at helping citizens build their understanding of the many ways in which the Oregon coast is likely to be affected by climate change and learn how they can involve themselves effectively in community efforts to adapt to these effects.

The new version of the Guide has two parts. “A Primer” presents an overview of climate science relevant to Oregon, potential effects, and adaptation planning at local, state, regional, and global scales. “Scientific and Policy Considerations” includes technical and policy papers written by Oregon experts in science, law, and policy in 2012. The Primer includes many links to a vast amount of additional information available on the Internet related to climate change, likely effects on the Oregon coast, and adaptation planning. The Guide is intended to stimulate action by citizens and communities to address the very real effects of Earth's rapidly changing climate.

The first edition was developed as part of our pilot Coastal Climate Change Adaptation Project four years ago, when Oregon Shores developed a set of background papers written for citizens interested in climate science and planning for the future impact of climate change on the Oregon coast. For this effort we recruited some of Oregon’s most distinguished scientists whose work sheds light on these issues, along with some of our most prominent land use lawyers, to produce papers on a wide range of subjects, from sea level rise and beach erosion to state law and planning tools.

This time around, thanks to a grant from the Lamb-Baldwin Foundation, we were able to engage Bob Bailey, recently retired head of Oregon’s Coastal Management Program, to draft a new section, the “Primer,” to pull together the key themes of the disparate collection of papers, provide context, and point the way toward wider sources of information. The entire volume was re-edited by Greg McMurray, presently an environmental advisor for Oregon State University’s Pacific Marine Energy Center – South Energy Test Center; previously, he worked for 25 years for state of Oregon agencies on coastal resource and policy matters.

The Citizen’s Guide is available online without charge; our goal is to provide a useful tool for engaged coastal citizens while informing the policy debate about climate adaptation. Watch for an announcement of a forthcoming print-on-demand edition, for those who would like to purchase a hard copy.