Drift Gillnet Opponents Gain a Portion of Our Demands 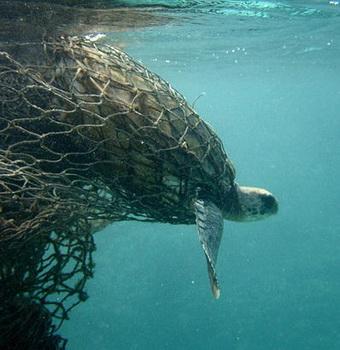 Joining fishing groups, businesses, and fellow conservation groups, Oregon Shores signed a letter to the Pacific Fishery Management Council (PFMC) asking the regulatory agency to crack down on drift gillnets that destroy a great deal of marine life.  In particular, these nets threaten endangered sea turtles such as the leatherback and loggerhead, along with whales and other marine mammals. The letter called on the PFMC to place stringent limits (“hard caps”) on driftnets at its September meeting in Sacramento, and to phase out the gear entirely as quickly as possible.

As it turned out, the Council adopted hard limits on the number of endangered marine mammals and sea turtles that can be injured or killed in the swordfish drift gillnet fishery.  For most species, including all sea turtle species, the limit is two inadvertent deaths per biennium (four for other species).  These caps are two-year limits, which means the fishery must stay below the cap over a two-year period. If the cap is reached or exceeded the fishery will be closed for the remainder of the fishing season, and possibly the remainder of the second year as well (if the cap is reached in year 1, the fishery will be closed the remainder of year 1 and year 2). Federal fishery observers are expected to monitor 30% of the fishery to determine if the caps are hit in the next two fishing years, and fishery monitoring will increase to 100% in 2018, according to the Council action. The hard caps will be regulatory and the Council’s action will now go to the National Marine Fisheries Service for final review and approval.

In addition to adopting hard caps for nine marine mammal and sea turtle species, the Council also voted to establish non-regulatory measures to reduce bycatch of other marine mammals, sharks and manta rays, and recreationally important bill fish species (e.g. marlin) that are injured and killed in swordfish drift gillnets. If the fishery does not reduce its bycatch to meet those objectives, the Council indicated it would consider additional management actions in the future.

This action brings us one step closer to a transition that phases out drift gillnets in place of cleaner, more sustainable gears to target swordfish in a way that is much safer for ocean wildlife.  All in all, the groups that have advocated for the elimination of the drift gillnet fishery consider this a substantial but not complete victory, since the PFMC did not actually adopt a policy that would definitely place this type of gear on a pathway to complete abolition.

Some background:  Drift gillnets target swordfish and thresher sharks.  However, these nets trap a wide range of wildlife not sought by the fishermen.  An average of 61% of all animals caught in the nets are simply discarded.  In addition to sea turtles, these can include many species of whale, dolphin, sea lions and seals, sharks and other fish species.

Up through the 1990s, the fishery killed turtles, marine mammals and other species in large numbers.  Regulations since then have greatly reduced the damage.  A Pacific Leatherback Conservation Area was created in 2001 by the National Marine Fisheries Service to limit this type of fishing during the season when turtles are likeliest to be present off our coast (Aug. 15-Nov. 15), and it was also required that electronic “pingers” be attached to nets.  In 2009, the Oregon Department of Fish and Wildlife stopped issuing permits for driftnets.  Washington has also banned the gear.  However, California-based boats may still fish in Oregon waters and capture turtles and other animals in our nearshore ocean.

Moreover, fishing interests have been pushing to get back into the Pacific Leatherback Conservation Area and resume fishing further and further north.  This year the PFMC approved an exempted fishing permit that will allow two drift gillnet vessels back into the conservation area.  Says Ben Enticknap of Oceana, the organization which has been leading opposition to driftnets, “The next foreseeable step is that the council may allow more fishermen back in, or lift large portions of the conservation area all together. This should be viewed as a big threat to Oregon.”  However, with the latest PFMC action, there is now leverage to push back against this type of fishery if damage to marine mammals, turtles and other species can be demonstrated.

The letter from Oregon Shores and other groups argues that other gear types can be used to target swordfish in an environmentally responsible manner.  In fact, swordfish caught with deep-set buoy gear fetch higher prices than those caught with gillnets.  We will continue to urge the PFMC to mandate a transition to less harmful methods.