Opponents of the LNG (liquefied natural gas) plant proposed for the Skipanon Peninsula plan rallied on September 21 between two hearings on the plan by the Federal Energy Regulatory Commission at the Clatsop County Fairgrounds.

More hearings are scheduled (see below and in the Events listings). Speakers’ slots are only three minutes long, so detailed testimony isn’t possible. Personal statements about issues such as the loss of wetlands and estuarine habitat, the public safety implications of siting a highly explosive facility in an earthquake zone, or the major traffic problems that will be created as hundreds of trucks daily transit through Astoria from the planned staging area at Tongue Point will be valuable contributions. 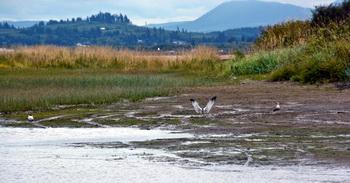 Throughout September, FERC will conduct hearings about the Oregon LNG project and the connected Washington Expansion Project (a series of new pipeline segments in Washington designed to feed into the proposed Oregon LNG pipeline and terminal). The hearings will take public input on the adequacy of FERC’s draft environmental impact statement (DEIS), which purports to assess the combined impact of Oregon LNG’s terminal, the Oregon LNG Pipeline, and the Washington Expansion Project. The next hearings are coming up in Vernonia, Ridgefield, Kelso, and later throughout the state of Washington.

According to a statement from Columbia Riverkeeper, our allies in battling the Oregon LNG project, “FERC’s analysis of the Oregon LNG project and the connected Washington Expansion Project is deeply flawed. The DEIS chronically understates the hazards and potential impacts of Oregon LNG’s terminal. And, although it is over 900 pages in length, the DEIS glosses over the public safety, environmental, and economic risks to communities along the hundreds of miles of new high-pressure, non-odorized pipelines that would be required to ship fracked gas to Warrenton for export. For example, the DEIS lacks complete information about emergency response plans, impacts to salmon habitat, and landslide risks along the pipeline routes.”