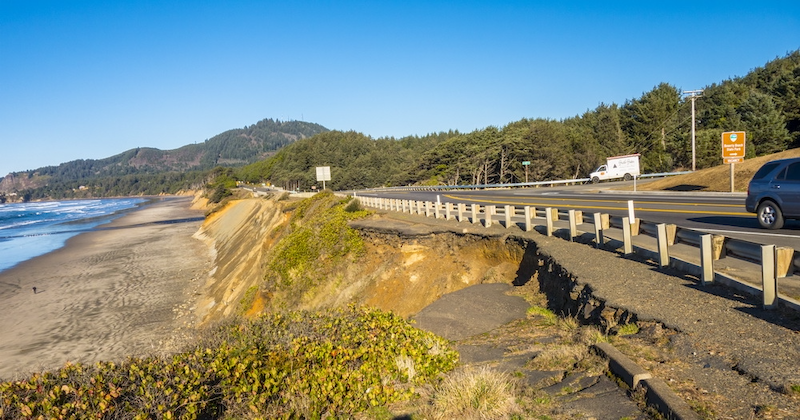 Highway 101 threatened by erosion at Beverly Beach.\Photo by Dennis White.

Oregon’s Land Conservation and Development Commission (LCDC) will consider a change to the state’s land use rules to allow shoreline armoring to protect roads adjacent to the ocean shore, including Highway 101. The hearing on the proposed new rule will take place far from the coast, at the next LCDC meeting at 8:30 a.m., Thursday, Sept. 22, in John Day (720 Airport Rd.). While it is doubtful many coastal citizens will be present to testify in person, it is also possible to participate remotely or comment by e-mail (see below).  For additional background information to assist with drafting comments, see the Take Action section.

The Department of Land Conservation and Development (DLCD) has been working toward a change in the rules to address a gap.  When the rules were written, they failed to specify that “ocean-facing roads” were eligible for protection from erosion by shoreline armoring where necessary.  The department’s goal is a narrowly tailored change that would allow for exceptions to statewide land use Goal 18, which regulates uses of beaches and dunes and limits the eligibility of properties for riprap or other hardened protection structures that intrude on the ocean shore.

While it may be necessary to protect Highway 101 and other infrastructure from disaster, Oregon Shores and other conservation groups are concerned that language about compensating for the loss of the public shoreline due to riprap revetments occupying the beach has been removed from the draft rule.  We argue that where a portion of the beach is lost to shoreline armoring, the balance should be restored through purchase to new lands for State Parks or other public uses.

DLCD’s intention is to amend rules governing “exceptions” to land use goals to allow local governments to take exceptions to prohibitions of shoreline armoring in Goal 18 to allow for the protection of public roads from erosion damage. The rule would allow for a local government goal exception process to accomplish this through a “reasons exception.” As proposed, a specific “reason” will be added to OAR 660-004-0022 for Statewide Planning Goal 18: Beaches and Dunes to include public highways and roads developed as of January 1, 1977, as eligible for shoreline armoring if a public benefit is demonstrated.

Shoreline armoring is the placement of structural material on the oceanfront with the intention of minimizing the risk of coastal erosion to development (e.g., riprap, seawalls). Currently, under Goal 18, only certain types of development that existed as of January 1, 1977, are eligible to apply for shoreline armoring permits. “Development” is defined as houses, commercial and industrial buildings, and vacant but improved subdivision lots. Under the current language, roads are not eligible for shoreline armoring. Some sections of Highway 101 and other city and county roads are oceanfront and vulnerable to the hazard of coastal erosion. In some cases, use of shoreline armoring for road protection may be warranted.

DLCD staff held three meetings with a Rulemaking Advisory Committee, focused on adding new language to the land use goal exception process for these public roadways, creating the option to protect them through shoreline armoring. But a provision requiring mitigation for lost land on the shore has been eviscerated.

The Department of Land Conservation and Development (DLCD) is soliciting public comment regarding the rule amendment.

A draft of the proposed rules and fiscal statements is available, on DLCD’s website at: https://www.oregon.gov/lcd/LAR/Documents/660-004-0022CORRECTEDNoticeFilingTrackedChanges.pdf

How to Comment: You may comment on the proposed rules by sending written comments by Sept. 22 to:

Rulemaking Hearing: You may also provide oral or written comments at the rulemaking hearing, in person or remotely. Contact Esther Johnson, esther.johnson@dlcd.oregon.gov, for further information. If you wish to address the commission, use this form to sign-up: https://www.oregon.gov/lcd/commission/pages/public-comment.aspx. Oral testimony at the hearing will be scheduled in the order in which requests are received.