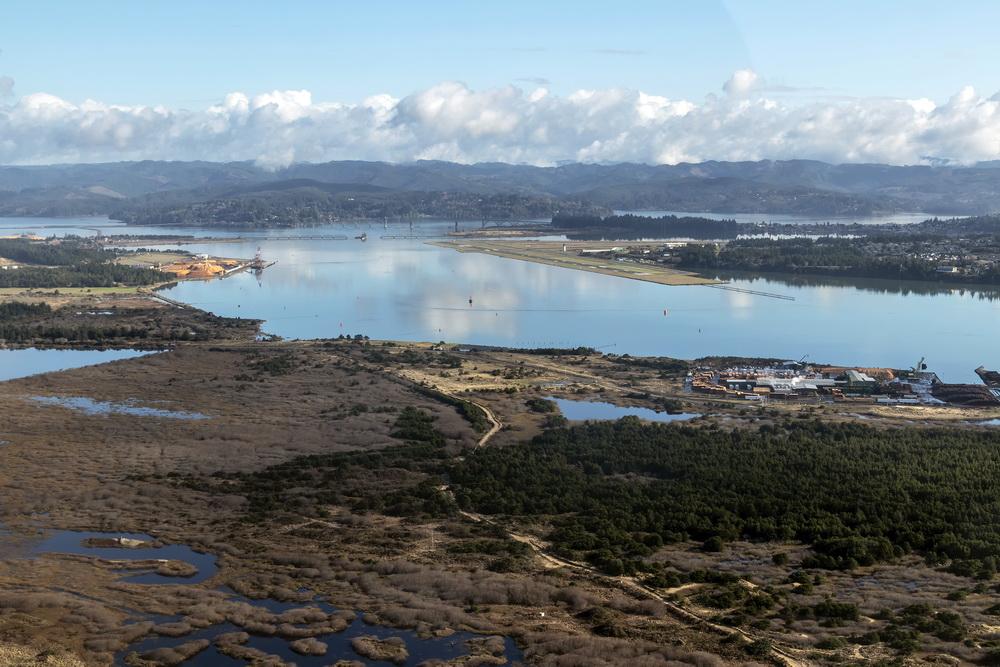 Coos Bay estuary, with site of proposed LNG terminal in the cove at center-left.\Photo by Rena Olson, with support from Lighthawk.

Oregon’s Land Use Board of Appeals (LUBA) handed two major victories on May 4 to Oregon Shores and other opponents of the proposed Jordan Cove LNG terminal, which Canadian multinational Pembina is seeking to build on Coos Bay’s North Spit.  LUBA overturned permits that would have allowed major dredging for deep-draft navigation in the Coos Bay estuary, in areas are zoned “Natural” and “Conservation” in the Coos Bay Estuary Management Plan.  LUBA reversed these local decisions because there was no sufficient justification for removing the protections for these ecologically important areas in favor of the navigation requirements of LNG tankers.

One decision rejected a land use approval by Coos County for the dredging (known antiseptically as “navigability improvements”); Oregon Shores was the lead appellant.  The other decision rejected a parallel approval from the City of Coos Bay; the Confederated Tribes of Coos, Lower Umpqua, and Siuslaw Indians (CTCLUSI) were the lead appellant here, with Oregon Shores intervening on the side of the tribe.  (Local group Citizens for Renewables intervened in support of both appeals.)  Oregon Shores was represented by the Crag Law Center, our partners in the Coastal Law Project.

Update:  The latest development is that the Federal Energy Development Commission (FERC), has now demanded that Pembina clarify its intentions regarding Jordan Cove.  In May, after losing the appeals we and others including CTCLUSI won, Pembina announced that it would "pause" its effort to build Jordan Cove.  There has been no activity since then.  While FERC had earlier granted Jordan Cove a federal permit, it was contingent on winning state and local permits, which the project has failed to do.  FERC gave Pembina, and project opponents, until Dec. 15 to file comments.  If FERC withdraws its approval, this would create one more major hurdle if Pembina were to try again to launch the project, and meanwhile, it would mean that landowners along the proposed route of the pipeline across the state that would be part of the development would no longer have to fear the use of eminent domain to force them to allow it to cross their lands.

The land use permit approvals by the local jurisdictions would have allowed Pembina to dredge in natural and conservation areas of the estuary under local zoning ordinances and the Coos Bay Estuary Management Plan. New dredging cannot be allowed in such areas without what is known as an "exception" to Goal 16, the statewide goal that sets basic standards for planning for estuaries.  If the local approvals had been affirmed (i.e., allowed to stand) by LUBA, they would have allowed Jordan Cove to (1) deepen areas of Coos Bay estuary to expand the existing navigation channel; (2) dispose of dredged material using underwater pipes; and (3) conduct maintenance dredging of the sites over and over, in perpetuity, continuously damaging bay bottom habitat as well as eelgrass beds which are crucial to the bay’s productivity.

Both jurisdictions had agreed to give Jordan Cove a “reasons exception” to Goal 16, which protects estuarine resources, thereby amending the existing Coos Bay Estuary Management Plan (CBEMP) to allow the proposed dredging in natural and conservation areas. In both cases, we argued that the County and the City had miscontrued the law relating to reasons exceptions, the proposed dredging was unnecessary to “improve navigation” in Coos Bay, and that there was no basis to justify a Goal 16 exception for Jordan Cove's dredging uses.

This is one of the few instances that the Land Use Board of Appeals (LUBA) has heard appeals to permit approvals of a Goal 16 exception. LUBA agreed with us that both approvals of Jordan Cove’s plan to dredge the lower bay were illegally issued because neither of the alternative reasons offered by the County or the City provided a basis to approve the reasons exceptions. LUBA reversed the decisions outright (rather than simply remanding them back to the County and the City). The reversal means that, barring further appeals, Pembina will need to submit entirely new applications to widen the navigation channel to both the County and the City. The company would need to come up with a new rationale that would enable the local jurisdictions to take an exception to Goal 18 and allow dredging that would destroy natural habitat in the estuary--one that would pass muster with LUBA.  We don't believe that they can.

Currently, the Jordan Cove LNG export terminal and pipeline cannot move forward because it has failed to obtain key state and local permits. In January 2020, anticipating a permit denial, Jordan Cove LNG withdrew its Removal-Fill application from the Oregon Department of State Lands. In January of this year, the Federal Energy Regulatory Commission (FERC) upheld the Oregon Department of Environmental Quality’s denial of a key water quality certification for Jordan Cove. In February, the U.S. Secretary of Commerce rejected Jordan Cove’s request to override the Oregon Department of Land Conservation and Development’s February, 2020 Federal Consistency Objection, thus upholding Oregon’s authority to deny the project under the Coastal Zone Management Act (CZMA).  Last month, in the federal case challenging FERC’s grant of authorizations to Jordan Cove, Pembina filed a motion in the D.C. Circuit arguing that that lawsuit should be put on hold because Pembina has "decided to pause the development" of Jordan Cove and Pacific Connector (the associated pipeline that would cross southern Oregon), as there is "uncertainty about whether [the] project would move forward in its current form." Conservation groups, impacted landowners, and tribal governments have filed motions opposing Jordan Cove’s request for an indefinite pause.

LUBA’s reversal of the decisions by Coos County and the City of Coos Bay is further evidence that the Jordan Cove Energy Project proposed by Pembina is wrong for Coos Bay and the State of Oregon, not to mention the planet (if build it would be Oregon’s largest emitter of greenhouse gases). These decisions, coupled with earlier appeals won by Oregon Shores and other LNG opponents, mean that the LNG terminal development cannot move forward for a long time to come.  Our hope is that this will prove to be the death knell for a misbegotten project.