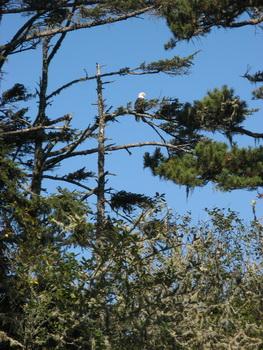 One of our Land Use Program’s proudest moments came on the day last year when State Parks completed purchase of the “Beltz Farm” property which occupies the spit enclosing the Sand Lake estuary just north of Tierra del Mar.  Our only role in the acquisition of the land for the public was to advocate for it.  However, a decade earlier the property might have been turned into a golf resort, destroying its natural character, if Oregon Shores hadn’t effectively blocked the development plan.  We stood vigilantly on guard to preserve the property from inappropriate development ever since, and our vigilance has finally paid off.

We therefore have keen interest in State Park’s planning process for the new park that will be located there.  Oregon Shores President Allison Asbjornsen is serving on the advisory committee that has been appointed to work with the Oregon Parks and Recreation Department (State Parks) in creating a master plan for the Sand Lake spit.

The first round of public meetings giving interested citizens a chance to weigh in on the area’s management has now taken place.  This included the first meeting of the advisory committee, held Aug. 27, established some of the concerns we face in assuring that the park is designed to protect the natural values of this extraordinary coastal resource.  While State Parks has made clear its intention to manage the future park as an essentially natural area, without significant development—an approach that Oregon Shores applauds—there are still many decisions ahead which could affect the park’s role in preserving what is essentially an intact coastal habitat area.

Any citizen can track the planning effort and contribute comments by going to the website set up by State Parks for this purposes, www.Beltzplan.com.  The site enables visitors to post notes directly onto a map of the site, and to take two related surveys.  Minutes of the recent advisory committee meeting are also on this site.

Allison notes that “We have a stunning new State Park Natural Area, but concerns are many because as the state biologist has observed, this is a botanical gem complete with saltwater marsh and freshwater marsh.  That said, there is European beachgrass and shore pine marching through the area, so we are introducing the idea of removal and what would that entail.”

Here are some of the key issues that have been raised, as Allison noted them during the advisory committee discussion:
Fish passage into Reneke Creek
Horses—if allowed, they could transport invasive species on their shoes or in their feed
Keeping ATVs out
Walking and accessibility—disabled access could result in serious impacts
Where are the entry points?
How big should the parking lots be?
Enlargement of the bridge to Whalen Island—may affect tidal influence on the spit to
Use by birdwatchers
Preserving unique botanical properties of the site
Access for school children
Locations of restrooms
Park hosts—would they be needed, and if so, where located?

For more information, to comment if you are unable to attend meetings, or to be placed on the distribution list for future notification, contact Ben Hedstrom of State Parks at (503) 986-0745, ben.hedstrom@oregon.gov.  Contact him by mail through the Oregon Parks and Recreation Department, 725 Summer St., N.E., Suite C, Salem, OR  97301.