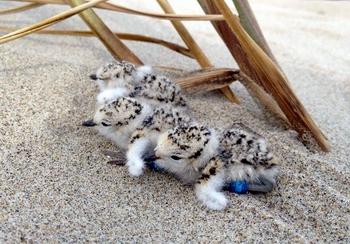 Nesting season for Western snowy plovers, a federally threatened shorebird that nests on the sandy shore, officially ended Sept. 15. Beachgoers are asked to follow nesting season restrictions on certain Oregon beaches through that date to protect snowy plover eggs and young.  CoastWatchers helped by paying special attention to the plover exclusion zones and keeping an eye out for violations.

This year there was a significant new twist:  A surprise sighting of a pair of western snowy plovers nesting on the spit south of Nehalem Bay State Park prompted State Parks to issue a “bird alert.”  This meant some changes for beachgoers on the two-mile stretch of beach south of the park’s day-use area.  CoastWatchers with miles along this stretch of shoreline were asked to exercise special vigilance.

Western snowy plover nesting areas in Oregon are managed by the US Forest Service, Oregon Parks and Recreation Department, Bureau of Land Management, and Army Corps of Engineers. Each year, these agencies implement nesting season restrictions on the beaches they manage to reduce disturbance to nesting birds. In some places known to be occupied by plovers, vehicle and bicycle access to the beach is prohibited during nesting season, as is camping and campfires, dog walking, and kite flying. In these plover nesting areas, hiking and horseback riding are allowed on wet sand, while dry sand is closed to all uses. Signs and ropes clearly mark which areas are off-limits during nesting season.

Snowy plovers were listed as a threatened species by U.S. Fish and Wildlife Service in 1993. Habitat loss due to the spread of nonnative, invasive European beachgrass is one major factor contributing to population declines, as are other human activities that disturb nesting birds and attract predators to nesting areas.  The species is also protected by state statute.  Western snowy plovers nest in dry open sand, in tiny, shallow scrapes that are very well-camouflaged. Not only are nests easy to miss (or step on), but the bird will abandon its eggs if disturbed too frequently.

Sightings of nests prompt special precautions in designated snowy plover management areas such as the southern portion of the Nehalem spit. Visitors saw warning signs on the dry sand in these shorebird conservation areas, and all activities on the dry sand ere curtailed during the nesting season. People and horseback riders were welcome to walk along the wet sand on the entire spit, but dogs, even on leash, were restricted to the three miles of beach north of the park’s day-use area.  Driving is already prohibited on the spit. As with dogs, bicycles—a kind of non-motorized vehicle under Oregon law— were only allowed north of the area during the nesting season.

“This was early in the year for snowy plovers to be nesting,” said Oregon Parks and Recreation (OPRD) Wildlife Biologist Vanessa Blackstone, who discovered the nest April 3. “This is the first time in 30 years that we have a confirmed nest here, and supports all the hard work Oregonians have done to help this species survive.” Other adult male and female plovers were seen along the spit as well.

OPRD is legally responsible for managing recreation on Oregon’s ocean shore. The U.S. Fish and Wildlife Service (USFWS) oversees the Endangered Species Act, and thus the status of the Western snowy plover. OPRD’s legal agreement with the USFWS, the Habitat Conservation Plan, spells out how to help the plover population recover.  In 2014, 338 adult plovers called Oregon home, an increase of approximately 10 percent over 2013’s estimate of 304 adults.  Last year was also a promising one for fledglings, with 272 chicks surviving to learn to fly.