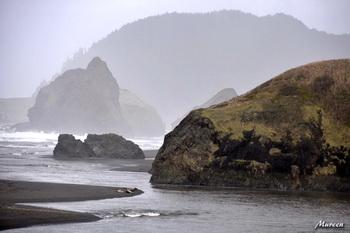 The public comment period concerning mining proposals aimed at the headwaters of south coast rivers has ended.  Now we wait for the next phase.

Public meetings held Sept. 9-10 in Gold Beach and Grants Pass by the Bureau of Land Management and U.S. Forest Service, attended by more than 400 people, were a watershed moment in public demand for protection of the south coast’s near-pristine rivers. Of all the dozens of people who spoke, only two opposed withdrawing the area from mining temporarily while its long-term future is considered. There will now be a pause while the agencies conduct an Environmental Assessment, after which there will be another comment period.

The headwaters of Hunter Creek, the North Fork of Pistol River, the headwaters of the Illinois River and the headwaters of the North Fork of the Smith River (rising in Oregon and reaching the coast in California) are all threatened by proposals for nickel mining on BLM or Forest Service lands.  Oregon Shores joined many south coast groups and individual activists in unsuccessfully opposing permits for exploration last year.  We’ve been awaiting the possible news that mining companies are proposing full-bore exploitation of this resource on these vulnerable lands.

The good news is that Oregon senators Jeff Merkley and Ron Wyden, along with U.S. Representative Peter DeFazio, have introduced the Southwestern Oregon Salmon and Watershed Protection Act of 2015, which prompted federal agencies (the Forest Service and Bureau of Land Management) to declare a “mineral withdrawal” which temporarily removes the area from the 1872 Mining Act, which opens to door to mining on public lands.  If the bill actually passes the area would be permanently removed, although the likelihood of this taking place is uncertain at best.

In the interim, the Forest Service and BLM have temporarily segregated the areas for two years to formally consider a five-year mineral withdrawal in order to give Congress time to act.  Right now we’re in a 90-day public comment period, so the time is now for opponents of mining in these ecologically precious watersheds to speak up.

Oregon Shores strongly supports withdrawal of this area from mining to protect the headwaters of southern Oregon (and northern California) rivers.  These watersheds represent extremely important salmonid habitat, harbor unique endemic plant communities, and are the source of drinking water for many.  Mining, the most polluting industry in the U.S., is incompatible with these values.

The "mineral withdrawal" is only for five years.  Once the withdrawal is complete, it will be possible to contemplate how to permanently protect the area from any future mining without operating in a crisis atmosphere.

You can find more information on the area of the proposed mining on the Rogue River-Siskiyou National Forest website.

For more information contact CoastWatcher (among many other things) Dave Lacey of Hunter Creek, (541) 373-0487, davejlacey2010@gmail.com.