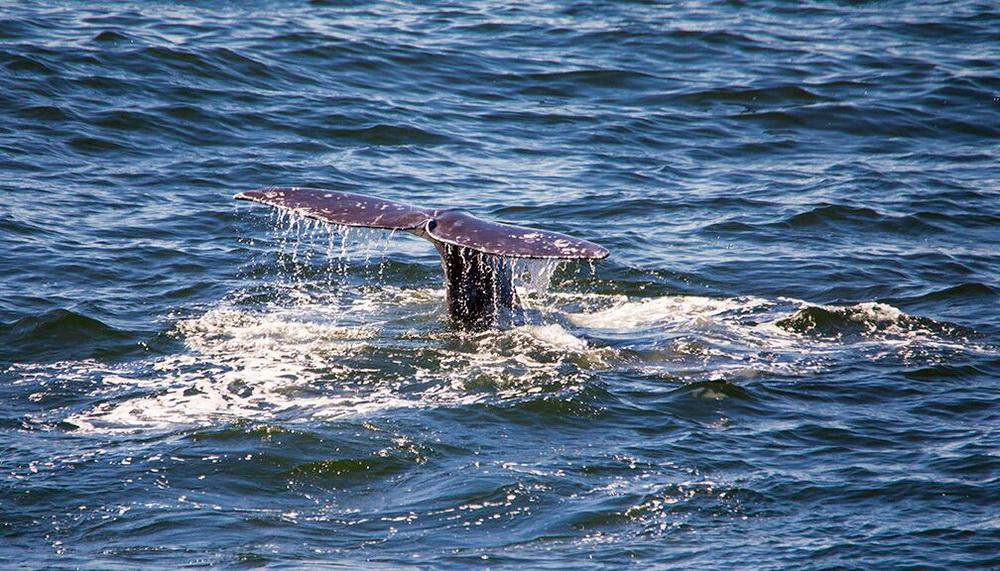 Whale fluke.\Photo by Dennis White.
The Hatfield Marine Science Center’s Research Seminar Series continues on Thursday, June 30, 3:30 p.m., with a seminar on whaling in the Soviet era.  These talks are now delivered in hybrid fashion.  The events can be attended in person in the auditorium of the Gladys Valley Marine Studies Building at the HMSC (2030 S.E. Marine Science Dr), or can be viewed online.

The speaker is Ryan Tucker Jones, Associate Professor of History at the University of Oregon.  His topic: “Red Leviathan: The Secret History of Soviet Whaling.”

This talk will present portions of Dr. Jones’s new book, Red Leviathan:  The Secret History of Soviet Whaling.  Using formerly secret Russian archives along with interviews with ex-whalers and cetacean scientists, the book examines the motivations behind the Soviet Union’s secret, and shocking campaign of secret, illegal whaling in the 1950s and 1960s.  It also reckons with the environmental consequences of this mass slaughter for the Antarctic and North Pacific Oceans.  Finally, Red Leviathan uncovers the hidden story of Soviet scientists’ exceptional advances in whale science from the 1930s on and the unheralded role Soviet citizens played in finally bringing their disastrous whaling industry to an end.

Food or drink is not allowed in the auditorium, so there will be a cookie and coffee social in the GVMSB atrium from 3 to 3:30 p.m. before the talk. Bring your own mug (no paper cups will be provided).